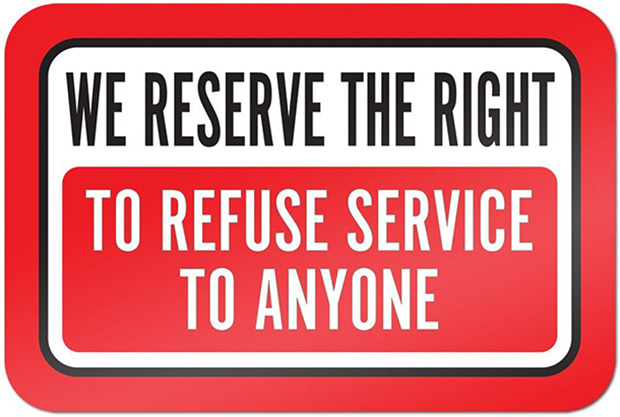 How can businesses refuse service and who can they refuse it to ?

We’ve all seen signs posted in restaurants and shops announcing that management reserves the right to refuse service. It’s one of those commonly used legal phrases, and most people have a vague understanding, without really knowing that is a pure discrimination…

Who can’t they refuse to serve ?

Over the last several decades, the civil rights movement in the United States has led to important legal changes guaranteeing the rights of individuals to be free from discrimination based on sex, gender, race, religion, and a number of other factors.

The Federal Civil Rights Act mandates “full and equal enjoyment of the goods, services, facilities, privileges, advantages, and accommodations of any place of public accommodation, without discrimination or segregation on the ground of race, color, religion, or national origin”.

Restaurants and stores qualify as “public accommodations” even if they’re a private business. As such, discrimination laws apply just as much on private property and to private businesses as they do in any public place.

Whether you post a sign or not, businesses never have the right to refuse or turn away customers because of their race, gender, age, nationality or religion. In addition to the Civil Rights Act of 1964, several states have their own civil rights legislation designed to prevent discrimination. The Americans with disabilities act, also prohibits discrimination in public accommodations, making it illegal to refuse service to individuals who are disabled or handicapped.

When can you refuse service ?

While the right to refuse service is not a get out of jail free card allowing businesses to turn away people they don’t want to serve, there are some valid reasons for asking customers to leave. Individuals or groups who are causing trouble or being disruptive may be asked to leave, while restaurants or other businesses with a capacity limit can turn away customers to prevent this limit from being exceeded.

Businesses can also refuse service to those who come in just before closing time or to those who are not making any purchases during their visit. There are various other examples… the key thing to note is that in each example, the decision to refuse service is not arbitrary or based upon an individual’s specific characteristics.

Declining to serve someone has to be reasonable and justifiable. If customers are not properly dressed, you can ask that they leave, but if a person is wearing reasonable religious apparel and you dislike their beliefs, you can’t use that as an excuse to send them on their way.

If there are safety concerns, or someone is harassing your staff members, then a business can refuse service. Likewise, if the way a person is dressed violates health codes, you cannot legally serve them, and if their clothing does not match your business’ clear standards (if someone wears jeans to a black tie dinner), then you have a clear and justified reason for your refusal.

For example, a court in California found that a bar was justified in refusing service to biker gangs who refused to remove their “colors” (marks of affiliation to certain gangs), because the bar had a legitimate concern that fights would break out. In this case, the refusal was specific and acted to protect a legitimate business interest.

The clash between businesses’ right to refuse service, the religious freedoms of business owners and anti-discrimination laws protecting gay or lesbian couples. As same-sex marriage and civil unions have become legal in several states and recognized by the federal government, several businesses have refused service to homosexuals on the grounds that they don’t agree with or support same-sex marriage.

It might interest business owners to note that while discrimination against serving certain sets of people is illegal, providing discounts for specific groups, based on age, occupation, political affiliation or military service.

For example, any discounts for students, the elderly, police officers, or veterans are often used to encourage business and is perfectly acceptable.

Like many areas of the law, the issue of discrimination and freedoms is constantly evolving, but the first few decisions in cases involving same-sex couples have found that businesses do not have the right to refuse service to gay or lesbian customers any more than they do to those of certain races or nationalities.

In the end, while individuals might have their own beliefs, places of public accommodation must be open to all patrons who follow reasonable rules (regarding behavior and dress). Using sexuality as a factor in refusing service is simply too arbitrary in today’s world.

Equality under the law is one of the principles on which the United States was built, and businesses should strive at all times to ensure all customers receive fair and equal treatment.

This website uses cookies to improve your experience while you navigate through the website. Out of these, the cookies that are categorized as necessary are stored on your browser as they are essential for the working of basic functionalities of the website. We also use third-party cookies that help us analyze and understand how you use this website. These cookies will be stored in your browser only with your consent. You also have the option to opt-out of these cookies. But opting out of some of these cookies may affect your browsing experience.
Necessary Întotdeauna activate
Necessary cookies are absolutely essential for the website to function properly. This category only includes cookies that ensures basic functionalities and security features of the website. These cookies do not store any personal information.
Non-necessary
Any cookies that may not be particularly necessary for the website to function and is used specifically to collect user personal data via analytics, ads, other embedded contents are termed as non-necessary cookies. It is mandatory to procure user consent prior to running these cookies on your website.
SALVEAZĂ ȘI ACCEPTĂ
Go to Top